Consecrate: make or declare (something, typically a church) sacred; dedicate formally to a religious or divine purpose.

Immaculate: (especially of a person or their clothes) perfectly clean, neat, or tidy. (in the Roman Catholic Church) free from sin.

So there you have it folks, Mary is NOW Sinless and more important than Jesus who died for YOUR Sin!

NO WHERE IN SCRIPTURE does it state Mary was Sinless. She needs and Savior just like you and I do. You WILL see her at the Judgment seat of Christ!

Mary the mother of Jesus was described by God as “highly favored” (Luke 1:28). The phrase “highly favored” comes from a single Greek word, which essentially means “much grace.” Mary received God’s grace.

Grace is “unmerited favor,” meaning something we receive despite the fact that we do not deserve it. Mary needed grace from God just as the rest of us do. Mary herself understood this fact, as she declared in Luke 1:47, “. . . and my spirit rejoices in God my Savior. . .”

Mary recognized that she needed the Savior. The Bible never says that Mary was anyone but an ordinary human whom God chose to use in an extraordinary way. Yes, Mary was a righteous woman and favored (graced) by God (Luke 1:27-28). At the same time, Mary was a sinful human being who needed Jesus Christ as her Savior, just like everyone else (Ecclesiastes 7:20; Romans 3:23; 6:23; 1 John 1:8). Read much more at Got Questions

2nd Thessalonians 2:11 “And for this cause God shall send them strong delusion, that they should believe a lie:” 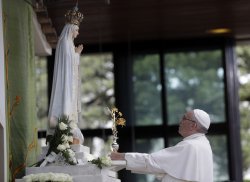 Christian News – Heather Clark – A number of Roman Catholic dioceses nationwide—and also globally—have been consecrating themselves to the “immaculate heart of Mary” throughout 2017, a practice that evangelicals say is unbiblical and gives to the earthly mother of Jesus the devotion that should be bestowed to Christ alone.

“We are uniting ourselves to her who opens up the way for God to enter, and we are uniting our hearts to her immaculate heart, the one heart that is perfectly united to the Sacred Heart of Jesus,” James Johnston Jr. of the Diocese of Kansas City-St. Joseph, Missouri told the National Catholic Register.

The consecrations are being conducted as 2017 marks the 100th year since the purported 1917 apparitions of Mary to child shepherds in Fatima, Portugal. The apparitions were stated to have taken place on the 13th of each month over a six-month period.

“God desires to establish in the world devotion to my immaculate heart,” Mary was quoted as stating during one of the appearances to the children. “To whomever embraces this devotion I promise salvation; these souls shall be dear to God, as flowers placed by me to adorn His throne.”

Diocese in Pennsylvania, California, Mississippi, Rhode Island, Colorado, New York and other states have already conducted consecration ceremonies, with more to follow for the remainder of the year.

“This is one way we can ask Mary to guide us and watch over us during implementation [of the Priorities],” Mary Woodward, chancellor for the Diocese of Jackson, Mississippi told the outlet Mississippi Catholic.

They conducted their consecration on Sunday, Oct. 8.

The Diocese of Santa Rosa, California announced in a recent letter that it plans to dedicate every parish and mission under its jurisdiction to Mary during services on Dec. 9 and 10 between the Catholic feasts of the Immaculate Conception and Our Lady of Guadalupe.

It also provided notice that those interested can participate in an online Marian Consecration Preparation Program.

“It is an act of trust in the love God has for us and in the love our blessed mother has for us,” it continues. “We entrust ourselves to Her maternal care with profound confidence and love. We trust that, having given over everything we have and are to Her protection and even Her dominion, we then rely on Her to distribute merits and graces where they are most needed.”