“Singer is openly bisexual, and has said that growing up Jewish and a sexual minority influenced his movies.” Source

So why was he allegedly dressed up in a Catholic Priest outfit? Hummm????

Has he converted to Catholicism and it is not known?  Dose he know something about the Priesthood that created more Euphoria in his perverted Sexual Escapades? I just wonder if he made his victims dress as Nuns? 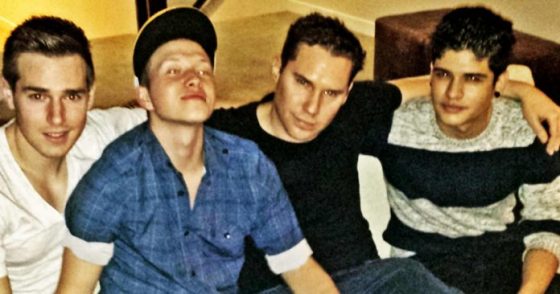 A man is accusing X-Men franchise director Bryan Singer of forcing him to be a sex slave while promising him a movie role, when he was a teenager.

As Hollywood director Bryan Singer is being sued by a man who claims that he was sexually assaulted by Singer when he was a minor, another man is coming forward and accusing Singer of forcing him to be a sex slave while promising him a movie role, when he was a teenager.

When Bret Tyler Skopek met Singer at a Halloween party in October 2013, he told Deadline that the director was dressed in a Catholic priest costume. Singer has directed movies such as Superman Returns, Valkyrie and the X-Men series. Skopek claimed that when he met Singer, he was 18 years old, and the director lured him in with talk of a role in the next X-Men movie.

However, that promise was never fulfilled, and Singer is not the only one Skopek is accusing of sexual assault. He claimed that he began receiving text messages from a middle-aged computer technician after the party, who offered to help Skopek, as he was new to Los Angeles.

Skopek described a scene to Deadline in which he came back to the technician’s apartment where other young men began arriving. The men all took the drug Molly, and Skopek said he eventually passed out, and woke up to a man raping him.

That same scene played out multiple times and Skopek said he was coached by the technician on “how to curry favor with these powerful men,” and he was told, “There are things that you could do to make them nuts.”

The computer technician then introduced Skopek to Singer in December 2013. He and another teenager were given drugs, and then taken to Singer’s room to have sex with him. The report from Deadline noted that the second teenager corroborated Skopek’s account of the night.

“Bryan offers to take me to breakfast and the X-Men special effects floor where they’re doing all the editing,” Skopek said, claiming he was the only one who was still at Singer’s house the next morning. “We maybe spend almost the whole day together at the studio until I take a Snapchat … Bryan gets mad at me and says he’ll have his assistant drive me home.”

Skopek claimed he then began to have a relationship with Singer, in which the two would go on dinner dates, and he began attending Singer’s sex parties, which involved as many as 10 people some nights.

The attendees were mostly young men like Skopek, who were new to Los Angeles, and hoping to make it in the entertainment industry. “The sad fact is this is how they think they have to live their lives. This is the only way to make it out there,” Skopek said.

“I’ve seen wannabe YouTubers come. I’ve seen actors. I’ve seen singers. I’ve seen people like me that don’t know what they want to do,” Skopek told Deadline. “You come (to LA) with dreams of being whatever. You’re still going to be caught up into this mess.”

Skopek claimed that Singer’s influence was strong, and that he would sometimes “watch a television show, see a hot guy, and ask his friends to contact the actor—as if casting the lead for his next big-budget film production.”

“It was like, ‘Let’s get on a roll. I want this guy in my room,’” Skopek said, noting that there were times when he would catch the director referring to him as “Little Bret” in text messages sent to friends as invitations to come and have sex with Skopek at Singer’s parties.

Skopek said that all of the partying, drugs and sex hindered him from finding his “big break,” and in the spring of 2014, he began to realize that working as a cashier at Tender Greens in West Hollywood would not continue to fund his cost of living.

When he told Singer that he was thinking of leaving Los Angeles, Skopek said the director offered him money, which only increased his dependence on Singer. Skopek eventually chose to leave California, and moved to Texas to live with his father. However, he is not the only one who has accused the director of sexual assault.

Michael F. Egan III filed a lawsuit against Singer in 2014, alleging that the director drugged him, raped him, and forced him to act as a sex slave at multiple parties. Egan claimed the treatment started when was 15 years old, and continued until he was 17.

“I was raped numerous times in that house, by numerous individuals,” Egan said. “You were like a piece of meat to these people.”

Egan later dropped the lawsuit after Singer paid him $10,000—according to Skopek—and after Egan was charged with conspiracy to commit securities and wires fraud and sentenced to two years in prison in 2015.

Cesar Sanchez-Guzman became the latest man to accuse Singer of sexual assault when he filed a complaint in the Superior Court of the State of Washington this week, claiming that Singer raped him when he was 17 years old, on a yacht in 2003.

Sanchez-Guzman claimed he met Singer while attending a party on a yacht owned by Lester Waters, “a wealthy tech investor who frequently hosted parties for young gay males in the Seattle area.”

“Later … Singer approached Cesar and told him that he was a producer in Hollywood and that he could help Cesar get into acting as long as Cesar never said anything about the incident,” according to the complaint.

“He then told Cesar that no one would believe him if he ever reported the incident and that he could hire people who are capable of ruining someone’s reputation.”

Posted with permission from The Daily Sheeple