Religion, especially Catholicism, is a Crutch for the Spiritually and Mentally Lame!

Bishop: I Don’t See How Joe Biden Claims to Be a ‘Good and Faithful Catholic’

Well Mr. Bishop, I don’t see how Pedophile Priests, or those who know about it, can claim to be a ‘Good and Faithful Catholic’!

I don’t see how ANYONE can approve of Homosexuality, or any other Abomination listed in the Bible for that matter, can call themselves a Christian, but they do!

ALL Catholics are “Good and Faithful” because Paganism let’s you off the hook. It is also because the Biblically Ignorant let him and others get away with it, that’s how!

A Pig will act like a Pig, in the presence of other Pigs, while in the Slop House. They are one of the herd doing what Pigs do! I just made that up! Do you like it? So as the saying goes, “if you put lip stick and a dress on a pig, it is still s pig”!

Nasty Nancy Pelosi is a Practicing Catholic Witch and she is in good standing! That old bat still takes the Eucharist!

2nd Corinthians 6:17 “Wherefore come out from among them, and be ye separate, saith the Lord, and touch not the unclean thing; and I will receive you,” 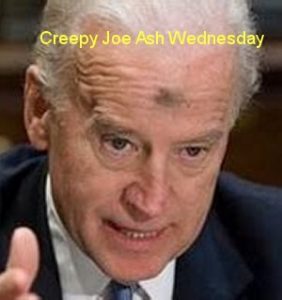 “Don’t understand how Mr. Biden can claim to be a good and faithful Catholic as he denies so much of Church teaching especially on the absolute child abuse and human rights violations of the most innocent, the not yet born,” wrote Bishop Stika on Twitter Friday.

The Catholic Church teaches that abortion is a grievous moral evil equivalent to murder, as it involves the intentional killing of an innocent unborn child. Being in full communion with the Catholic Church entails embracing its core teachings on faith and morals, something the bishop questions in Biden’s case.

The Catechism of the Catholic Church states, “From the first moment of his existence, a human being must be recognized as having the rights of a person — among which is the inviolable right of every innocent being to life.”

Abortion “is gravely contrary to the moral law,” the Catechism declares, and, therefore, a person who procures an abortion incurs excommunication from the Church “by the very commission of the offense.”

Mr. Biden has reiterated his support for abortion on demand and has promised to work to repeal the Hyde and Helms Amendments that protect taxpayers from having to fund abortions. Read more at Breitbart News

Joe Biden is a Faux Christian.

I have witnessed numerous times to people asking them if they know Jesus as Lord and Savior. Are you saved, are you Born Again. 50% of the time I get “I am a Catholic” They don’t mutter the words I am a Christian because they are NOT!

2nd Corinthians 11:13-15 “For such are false apostles, deceitful workers, transforming themselves into the apostles of Christ. 14 And no marvel; for Satan himself is transformed into an angel of light. 15 Therefore it is no great thing if his (Satan’s) ministers also be transformed as the ministers of righteousness; whose end shall be according to their works.”

Biden Launches Campaign to Trick Stupid Christians into Voting For Him

Pulpit and Pen – In a move to bolster his share of religious voters, the pro- abortion, pro- homosexuality, pro-destruction of the family, anti-god, bible-denying, christ-hating presidential nominee Joe Biden has launched a new faith-based outreach called “Believers for Biden.”

The campaign is comprised of “public weekly prayer calls” and will involve other religious events for “religious voters.” It is being led by Democrat Senator and ordained Minister Chris Coons, also a pro- abortion, pro- homosexuality, pro-destruction of the family, anti-god, bible-denying, christ-hating politician, in an effort to peel away religious voters from Trump.

Coons has laughably presented Biden as:

A servant leader who sees, understands, and welcomes the breadth and diversity of the American experience, and is personally engaged in pastoring, caring, witnessing to the possibility of reconciliation in our nation.

Deputy political director John McCarthy describes Biden’s identity as “a very devout Catholic and person of deep faith,” which is “baked into the core messaging and core functions of the campaign.”

The Washington Examiner reports that:

Josh Dickson, an evangelical whom the campaign hired in mid-July to start outreach to faith-based voters, framed Biden’s appeal to religious voters in more blunt terms.

“This election is about two visions for this country that are diametrically opposed,” he said. “And we believe that Joe’s vision is rooted in that idea of redemption and restoration.”

Dickson, who left the Republican Party in 2012 to work on then-President Barack Obama’s reelection campaign, called the narrative of “redemption” the key to understanding how the Biden campaign can reach a wide-ranging array of people of faith. He added that “leaning into the idea of human flourishing” and creating a “more redemptive, just, restorative society” are ways in which the campaign hopes to present ideas of racial and economic justice to religious voters.

Biden has claimed to be a Christian for decades, presenting himself as a devout Catholic in public statements. Given this, he is the most high-profile Roman Catholic in America, and if the Roman Catholic Church wasn’t such an egregiously cowardly and morally bankrupt institution, the church leadership would have called him out years ago and refused communion and excommunicated him for being an enemy of the church.

By all accounts, Biden’s campaign may succeed with people who are nominally “spiritual” and believe that “there’s some kind of being or force out there in the universe watching over us, maybe,” if that’s what passes for “religious” nowadays, but ought not to appeal to any true believer who has a modicum of biblical sense.